Humans have been using batteries for thousands of years. The use of batteries in ancient times has been proven beyond refute. Various records have shown that ancient Egyptians and Greeks have used batteries for various purposes. In ancient Sumer, people used batteries for electroplating objects with fine layers of gold or silver. Although a prototype of that battery has not yet been earthed, archeologists have excavated ancient batteries that date back to 250 BC. These excavations show that batteries as we know them today might not be a recent invention.

In this article we will reveal to you three of the most ancient batteries known to man that were used to generate electricity, though on a very small scale.

The Baghdad Battery is the oldest know man-made battery that is thought to have been prevalent during the Parthian rule (250 BC - 224 AD) in present-day Iraq. The battery was excavated in Baghdad in 1936 and therefore was given the name Baghdad Battery.

The Baghdad Battery consisted of tall terracotta jars containing copper cylinder that housed an iron rod. The copper cylinder was made of rolled up copper sheet and was isolated at the top of the iron rod by asphalt plugs. Scientists believe that this jar was filled with grape juice, vinegar or lemon juice that acted as an electrolyte agent. The excavators who found the first of these pots suggested that this was a primitive battery. Modern reconstructions of the Baghdad Battery did indeed show that it was possible to create electricity with it. 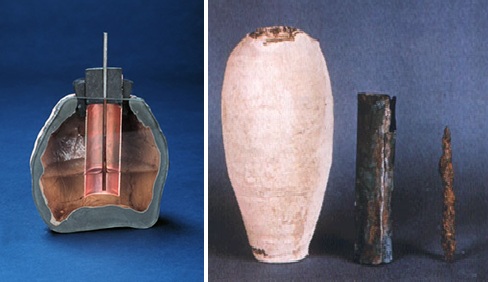 Electric eels are probably one of the most ancient batteries known to men. Electric eels or Electrophorus Electricus are able to generate a jolt of up to 600 volts. Around 80% of the electric eel’s body is made of organs that produce electricity. The electric organs are made of electrolytes that are stacked in inside the organ similar to a dry cell battery.

Some scholars believe that ancient Egyptians might have developed a giant electric battery to power electric bulbs. Beneath the Temple of Hathor at Dendera there is a crypt with walls inscribed with some very curious reliefs. One of the walls of the temple is decorated with human figures standing next to bulb-like objects that look like over-sized modern-day light bulbs. Inside these "bulbs" there are snakes in a wavy lines. The snakes' pointed tails issue from a lotus flower, which, can be interpreted as the socket of the bulbs. The light bulbs on the relief are powered by a cable stretching from a giant object that looks like an electric battery.

Although no real artifact of the device has been unearthed, some scholars believe that this relief depicts one of the most ancient electric batteries known to man. Various other reliefs in the temple of Hathor show bulb like devices with filament wires similar to modern day bulbs. These curious artifacts show that humans might have learned to use batteries for powering up devices much earlier than once imagined. 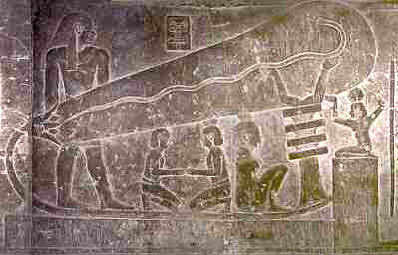